Where to get free National Day Parade 2012 tickets? As a true blue Singaporean, I have never attended the live NDP, other than participating in the 1994 NDP parade.


National Day is a time where we get together, remember that the soil, the road, the chair, the roof and shelter we have now is not given, but being fought. Fighting? not the physical way but persistence.

New Singaporeans must adopt to the way we live. The true blue Singaporean may influence them. Slowly, they will forget about their country and when you ask them: where are you from, they will not say the country where they are born but Singapore.

There have been words spreading, in Social Media, Facebook and other unreliable sources about our Ex prime minister, one of our nation's founding father, now our minister mentor, Mr Lee Kuan Yew has passed away few days before the National Day 2012. Some asked: Lee Kuan Yew died? Is Lee Kuan Yew attending NDP national day parade 2012? Upon hearing this, it is quite of a mix feeling. Yes, we have lost someone that has contributed much to the nation for the past century.
No, because we do not know each other personally and has no feelings.

True or not, even Mr Lee Kuan Yew has passed away, we must hold hands, be strong and united, tell off foreign policy that wants to use monetary benefit to buy our heart.

Yes, with money, they can buy a heart but they cannot buy love.

If integrity, love and value can be exchanged for other benefit, it will be a beheaded offense.

Few weeks ago, I was driving my truck along Kranji Road. It was an area where many heavy vehicles passed by for work around this industry area. There was a road block on both ways. The purpose of the operation was to stop Singapore lorry drivers that do not put on the seat belt. I was being stopped. Gladly gave the policeman my details. 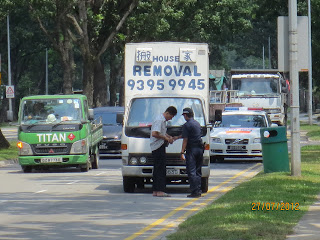 I found the company that does professional house moving job!


I asked if why did they decide to do this operation and he said that he is just the person executing instructions from his boss, back in the office.

I asked: then why your boss decide to execute this operation?

Policeman: I think they receive information that there are many truck drivers along this road that do not put on seat belt.


so, so.... Singapore law is: To let you learn, you have to be punished first before educating.

I did not appeal against it. I accept it because it was a rule.

Ask yourself this question: why do we have to put on a seat belt?

a) because it is a law and the fine is $120 and will have 3 demerit points deducted.
b) because it will save our life.

I feel that the answer will be 'b'. We should be educated this way.

There were many truck and lorry drivers out there, doing hard work, rushing to earn the hard money, skipping their meal to earn extra $10 for the family they have to feed. Most truck drivers out there have heavy burden and family to feed.

If, the operation would be to educate all truck drivers, the intelligence team of the traffic police should have:

1) public awareness. Putting up posters around and through radio broadcast to remind because there was a myth that lorry or truck drivers do not need to put on seat belt.

2) send out letter to individual lorry/truck drivers that putting seat belt is mandatory.

3) after a few months, then it will be more justifiable to set up road block and punish the offenders.


I drove off, parked aside. I walked 100 meters before the road block, standing by the side of the road, waving to all drivers that did not put on their seat belt to do it immediately. For my half hour effort, the traffic police had maybe lost $1200 of revenue from the fine that they are suppose to generate from this operation.

As I was walking back to my lorry, a policeman stopped me and asked why did I take pictures.

He replied: only with valid reasons.

and he requested to have my identity card to take down my details.

So? I pity these officers. Standing under the sun, got all the curse from the drivers. 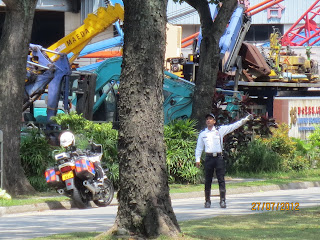 Look at the tree, it has good trunk and root flare. Unless abnormal wind conditions or soil disturbance, it will be good.


Anyway, I was very impressed by their work efficiency because the offense letter came to my mailbox 3 days after.