Ride to the 'unrest' area of South Thailand

WARNING: Travelling to Narathiwat, Pattani, Songkhla and Yala provinces can be dangerous and is strongly discouraged by most embassies due to an insurgency between Malay separatists and the Thai armed/paramilitary forces and police. Since the start of the conflict in 2004, there have been more than 4,000 fatalities. Tourists have been killed during car bomb attacks in Hat Yai (Songkhla Province) in 2006 and in Sungai Kolok (Narathiwat Province) in 2011. However, it should be said that most attacks are aimed at the armed forces, police, government officials and people seen as collaborators with the Thai state. If it is necessary to visit, inform your embassy, remain cautious at all times and follow the advice of locals. 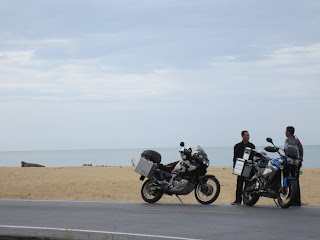 What is life in a big city, a big ‘state’ of Singapore?
Hope, version 2.0 on the way. Bring us back to memories of how a virgin would feels like. We got the bike, with Leong and Cheryl, we headed toward the ‘unrest’ area of South Thailand. 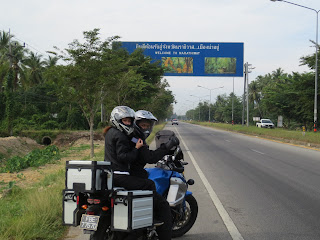 Going for this short trip was not easy. We planned it too tight for me. I have to settle my company’s ‘unrest’ issue, making sure I have no phone calls while away. The next day after touch down to Singapore, I have to attend to my annual military in camp training on the next morning.
We loaded all weights on Hope 2.0 and relized that there were clicking sound when it moved. The first destination was to head 80 meters to the petrol station, remove the sticky new panniers, insert the key to open the seat, took out the tools to re-adjust the chain tension. Sweating at 11pm with our full gear.
Our intension was to pass through motion via North South highway in the night, reaching Kuala Kangsar exit when day breaks. Breakfast at a local nasi lemak stall where the owner was so nice to us and the cats around. No funky usual food but nice local folks. 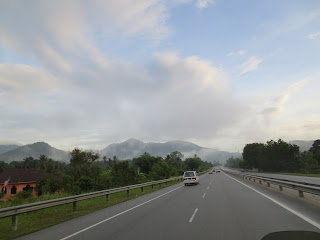 Staff of petrol kiosk at Griek needed to be educated that Singapore registered motorcycle can top up fuel, regardless of RON 95 or 97. The first hurdle was to temporary import the number FQ3515B into Kingdom of Thailand. In 2008 January, during our RTW, we exported Hope Too via airfreight from Bangkok. We hand over all documents to Mr Thanit of TAC. He had our temporary import permit and suppose to hand over to the custom. Now, at the Betong border, the authorities did not receive information that we had returned the document when we freight out in 2008. We did show them the airway bill, convincing them that we DID export out the bike and the authority at Bangkok gave us the greeeeeeen light. Friends, how can we prove that we did hand over the documents to them? No way right? We had to pay 2000 Baht for someone else’s error. 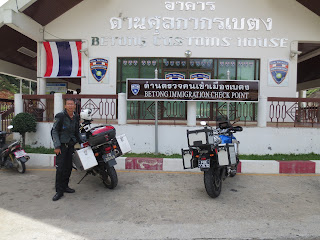 By the time we entered Thailand, Betong, it was noon of the next day. 4 of us were sleepy and tired, especially Leong, staying awake for the past 30 hours. The border town of Betong was flimsy. We went around to search for a comfortable place with safe parking and nice bed but was IMMPOSSIBLE! Rounds and rounds, we gambled. Leong and Cheryl had a taste of how we lived during our RTW. 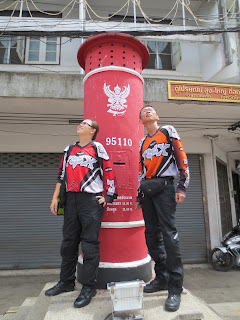 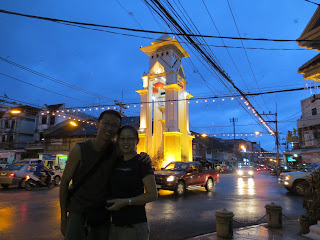 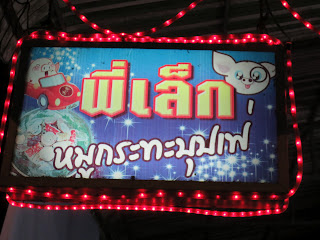 The dinner we enjoyed at Betong. Show this to the locals. 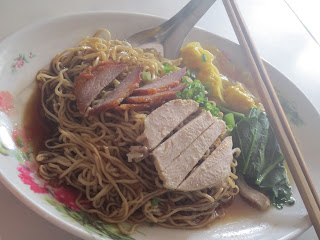 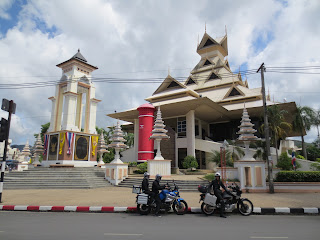 If you don’t compare Betong with Hatyai, you will be a very happy person.
Our only catch in Betong was the nice BBQ dinner. Ask me about the location!
The bike trip starts from Betong. Windy roads and countless of military check post, the 2 new bikes were too shy to test the limit. Rolling on to the tar road that I used to ride, was dirt and dust. The scenery maintained. 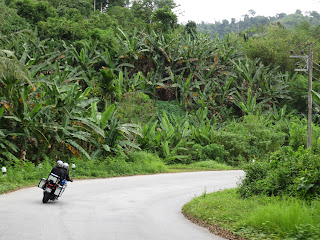 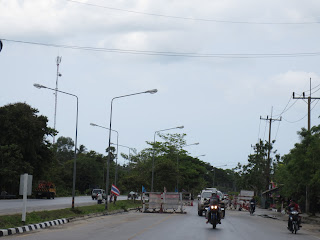 We got our pee stop in the first ‘unrest’ town of Yala. The Thai lady was putting in air to her tires when we parked beside her. She wanted to offer us the pump after she finished the job. The mechnics at the workshop gladly gave us good directions to Pattani. 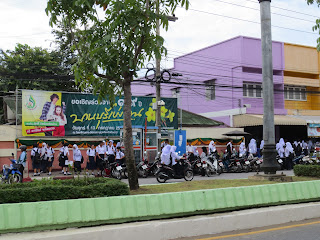 Our objective: to explore the unexplored. The beach town of Panare had more stray goat than cats in Singapore. Little drops on the road ain’t road tars but fertile goat poo. The beach was unpolluted. We witness fishing nets being knitted, long benches to dry fish products and curious kids wanted to know why we are here and showing off their English that they have learned from school. 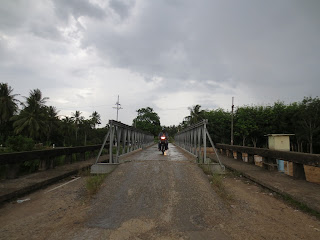 we went outskirt, out of the usual highway.

Back to Pattanii, it rained. We lost our way. Samantha went to the convinent store to buy drinks and asked for the direction to the lodging. I went over to listen to the manager explaining 10 minutes, in detail, the direction. She was very patient and I tried my best to take out my thai-english dictionary figuring out left was not right. 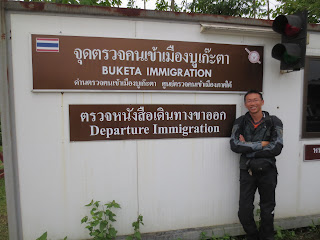 Getting out of Thailand, we took the new Buketa Immigration post. Built in 2009. 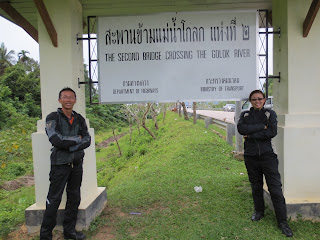 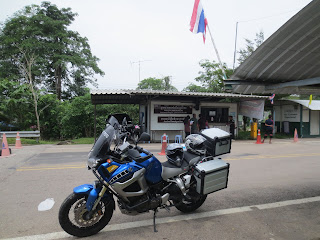 At the Thailand side, there are only 4 container offices. On the Malaysian side, it is a massive huge building!

I was clear of the drawing she drew and went back to the gang to discuss. She came out, telling us that she wants to drive us to the destination. She was much polite and insisting. 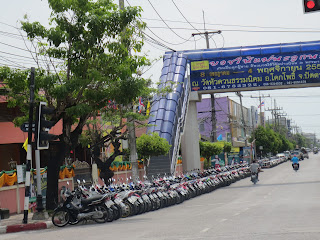 The lodging we had was worth 10 times what we paid for at the border town. The boss and the general manager were of Chinese descendent, could speak the same frequency as we did, really treating us as a guest. Even our KFC dinner, we felt being as a guest when we asked about the Pattani currency policy. The cleaning staff would try all ways to get our Singaporean questions answered. 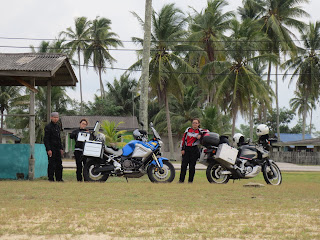 What is money? Some would think that the neighbouring country is poorer. We went to an Internet café and I owe them 10% of the bill. The cashier has no issue with it. 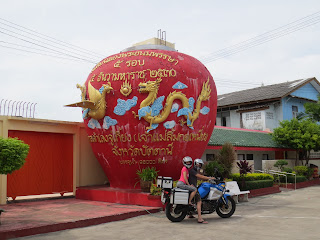 We went to a touristic temple. The other local visitors were glad to make friends with us. This was the very first time where I parked the bike, leaving my helmet and GPS on it and walked away. I felt not at threat at all. Being such a defensive person, I could let down all and leave them there. 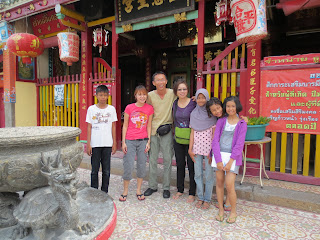 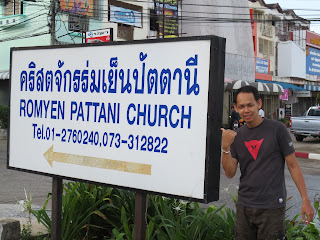 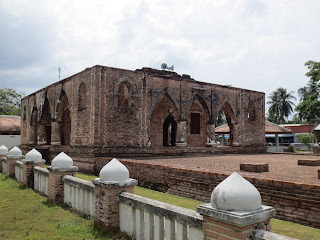 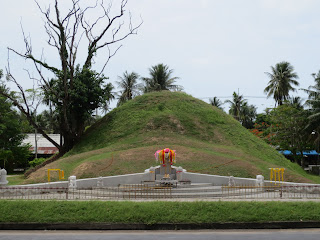 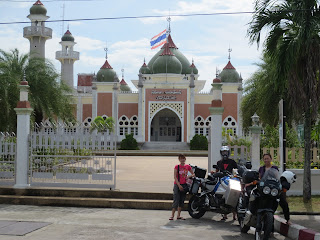 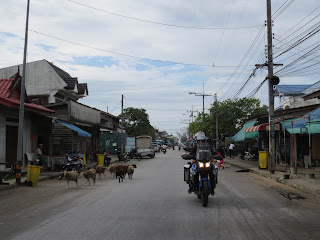 The biggest mosque in Thailand

Thinking back, we didn’t see any people being touts, any feel of threat, any thought of bombs. 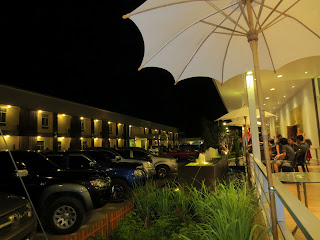 the cosy lodging we stayed at Patanii. So affordable!

But it was the very first experience that I had body massage served by a man. Ohhh.
Posted by singaporedream at 11:37 PM 7 comments: